I went up to the North Shore last Thursday to try my luck for some Loopers and Steelhead. Met up with my brother and his friend Joel. Both worked for the Duluth Police Department and are now retired. All of us have fished the North Shore since the early 60’s for steelhead and loopers [kamloops rainbows]. Chilly air greeted us early in the morning even though the sun had come out. As the day progressed, it became warmer, and turned out to be a nice day.

Joel managed to catch a nice 5 pound male looper right away when he arived. Caught it on a small piece or white yarn with a couple of waxies on the hook. This was drifted under a bobber on the edge of the current. My brother and I didn’t get a bite all day, even though we covered a lot of water, stopping at all the streams up to the Split Rock River. Joel also caught a 4 pound male steelhead, which he released. All steelhead have to be released. It was just great being up there, catching a trout is a bonus. Here are some pics of the day: 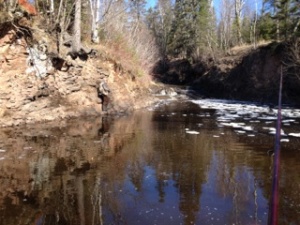 Many of the areas we fished were small areas where we normally do well.

Joel with his nice 5 pound Looper. 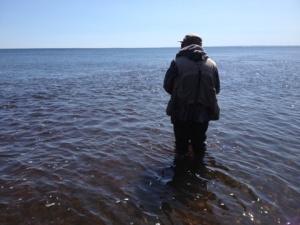 Often time Looper and steeelhead can be caught right near the rivers mouth.

Larger pools like this one can hold many spawning trout.

One of many reasons many tourists travel and visit spots on the North Shore. Time to head back soon.

This site uses Akismet to reduce spam. Learn how your comment data is processed.