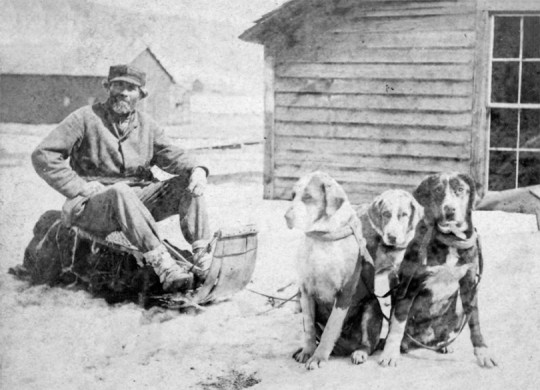 Since 1980, the John Beargrease Sled Dog Marathon has attracted mushers from around the world.  Beginning in Duluth and running 400 miles along the north shore of Lake Superior to the Canadian border, the Beargrease is one of the longest, most grueling race routes outside of Alaska.  With the 30th running of the marathon starting later this month, many people are asking “Who is John Beargrease” and Why does he have a sled dog race named after him?”.

John Beargreas’s story began in a wigwam on the outskirts of the first settlement along the north shore of Lake Superior, Beaver Bay.  The son of an Anishinabe Chief, Beargrease grew up fishing, hunting, and trapping along the north shore with his father and two brothers.  When he was in his teens he worked on commercial fishing boats that sailed up and down the coastline.  By the time he was in his twenties, a few more small settlements had sprung up along the north shore, including Agate Bay [now Two Harbors], Castle Danger, Pork Bay, Grand Marais, and Grand Portage.  Since the train only went as far as Agate Bay, people along the shore had a hard time sending and receiving mail.  Since this was often the only form of communication with the outside world.

Letters and packages from family and friends were extremely important.  Since Beargrease and his brothers made regular trips up and down the shore trapping and trading, they began to grab the mail in Agate Bay for the residents along the shore and deliver it as they checked their traps or traded with other residents.  By 1879, the brothers were making trips for the mail and delivering it all the way to Grand Marais once or twice per week.

Over the next twenty years, Beargrease was a welcome sight for people living along the north shore.  They would eagerly await his arrival each week.  He not only delivered mail from their loved ones, he also brought local and national news, weather reports from up and down the shore, and for some- a little company.  Beargrease would make his route year ’round in all types of weather.  In the warmer months he would deliver the mail by canoe or boat, but he was best known for his winter travels by dogsled.  he made his fastest dogsled trip from Agate Bay to Grand Marais with a load of about 700 lbs. of mail in just under 28 hours.  In the summer, he could make the same trip by boat in about 20 hours.

John Beargrease made his last mail delivery on April 26, 1899.  By that time, the trail he traveled for over twenty years had become a well-used road.  He made his last delivery using a horse and buggy instead of a canoe or dogsled.  Beargrease continued his successful trading business along the north shore, making his home in Beaver Bay and among his people in Grand Portage.  One day in 1910, he went out in a storm to rescue a mail carrier whose boat was caught in the waves of tamarack Point, near Grand Portage.  He caught pneumonia after the ordeal and died soon after.  His grave can be seen today at the Indian Cemetery in Beaver Bay.

Because of his reliable and successful mail delivery, the population along the north shore grew and the economy stabilized.  Small settlements grew into permanent towns with residents who continue to recognize  the role John Beargrease played in their history.  Forgotten Minnesota.

Do hibernating bears ever leave their den during winter if the weather gets unusually warm?  hibernating bears are prompted to come out of their den both by warming temperatures and by increasing day length [normally late March to early April].  thus, a January thaw typically will not fool a bear into coming out early.  However, some bears may find themselves in a wet den when temperatures get warm, with snow melting around their den, and this could force them out.

Bears also may be more prone to disturbance from humans during warm spells when they are not hibernating as soundly, and this could cause them to vacate their den.  After abandoning their den, they will typically find another suitable site that they already know about.  However, any new den would not have the bedding material that bears rake in during the fall when they are preparing for hibernation.  Dave Garshelis, DNR bear research biologist.

During the winter months, the two large catfish species present in Minnesota behave differently.   Channel catfish remain active and will congregate in loose schools in the rivers and lakes they inhabit.  Anglers can target these fish through the ice [if ice is thick enough], or even in open water in deeper, slow-moving areas of rivers.  The Horseshoe Chain of Lakes near Cold Spring is a popular destination for anglers looking to target channel catfish through the ice.

Flathead catfish, on the other hand, migrate to wintering areas when the water temperatures dip down to 50-55 degrees Fahrenheit.  They congregate in deep holes in the rivers, out of the current, and essentially go dormant until the water warms in the spring.   Many dozens of these large fish can stack up on top of one another in groups and are highly vulnerable to illegal snagging.  A recent change in Minnesota fishing regulations has closed the angling season for flathead catfish from Dec. 1 to March 31 to protect these large, dormant fish from being over exploited.